When we talk about biggest birds that will secure places in Guinness World Records in 2020 and look like a human sitting in a bird clad-few large birds come in our mind and harpy eagle is one of them. In person or pictures, harpy birds is a giant bird of prey. Albeit it’s an absolutely massive bird. Harpy Eagle is a fierce looking, proud sitting and larger than life appearing bird.

The Habitat of Harpy Eagles

One of the most powerful living raptors still living in the rainforests, harpy eagles are the largest species of eagles on our planet. Their wingspan can touch the range of 7 feet and 4 inches and they weight between 8 to 20 pounds.

If you look into his eyes, it looks very threatening and confident as if it eats people in breakfast.
From one angle harpy eagle looks so big as if a person is sitting in a birdie cosplay from a fantasy world while from the it looks like Pokemon and from the third absolutely an alien in Area 51 who has just crashed down from a spaceship.

Many large birds hold records for various characteristics and features and harpy eagle is one such prestigious large majestic bird. We have collected many pictures of harpy eagle below that will show just how mighty it looks.

A face we can’t forget even in our dreams. Imagine what it would look like from a closer distance

Harpy’s talons are not something to make fun of

The species of Harpy eagles hailed to upper side of lowland forests. But due to deforestation in Central America only a little below or above 50,000 of them are left in the whole world. In Brazil they call it the Royal Hawk.

There are two types of harpy eagles in the world- American and Papuan. Both must not be taken lightly at all. They can threat any human and can be menacing at times.

What do you think of these 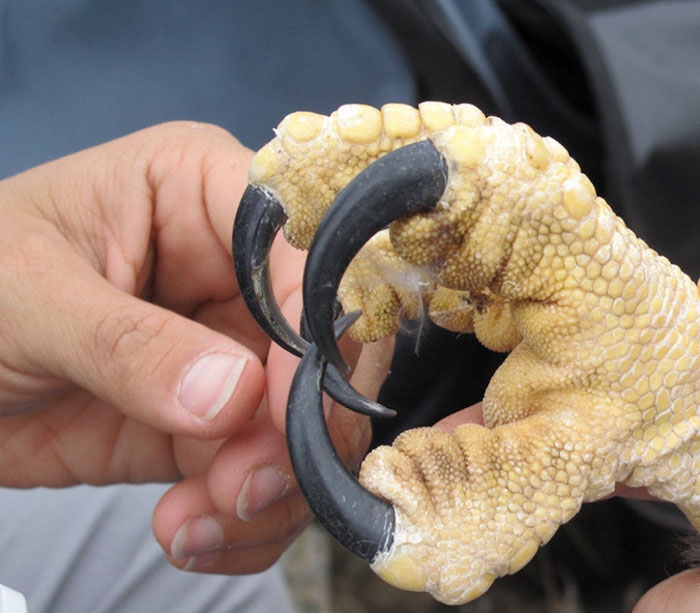 Is this a big bird or a man in cosplay

This huge bird of prey is very popular on social media. A compilation of its images went viral on Reddit and Imgur in a short time.