Pets adoption has risen a great deal since the advent of social media. Now we get to know about various adoption stories from all around the world that tell about a dog or a cat in worse condition before adoption and then they reinvented their lives after finding forever families. Here we have round up 30 pets before after adoption stories that will melt your heart. 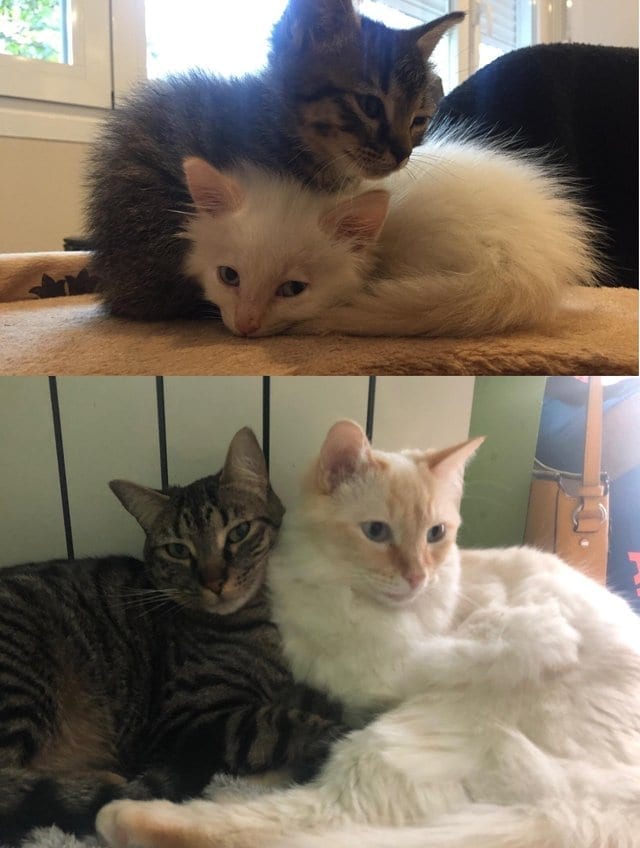 #2 Got Journey three years ago from an adoption event. Smelly and snotty with undiagnosed FeLV. He’s the sweetest kitty you’ll ever meet (besides the occasional sneeze in the face when he inevitably gets sick). 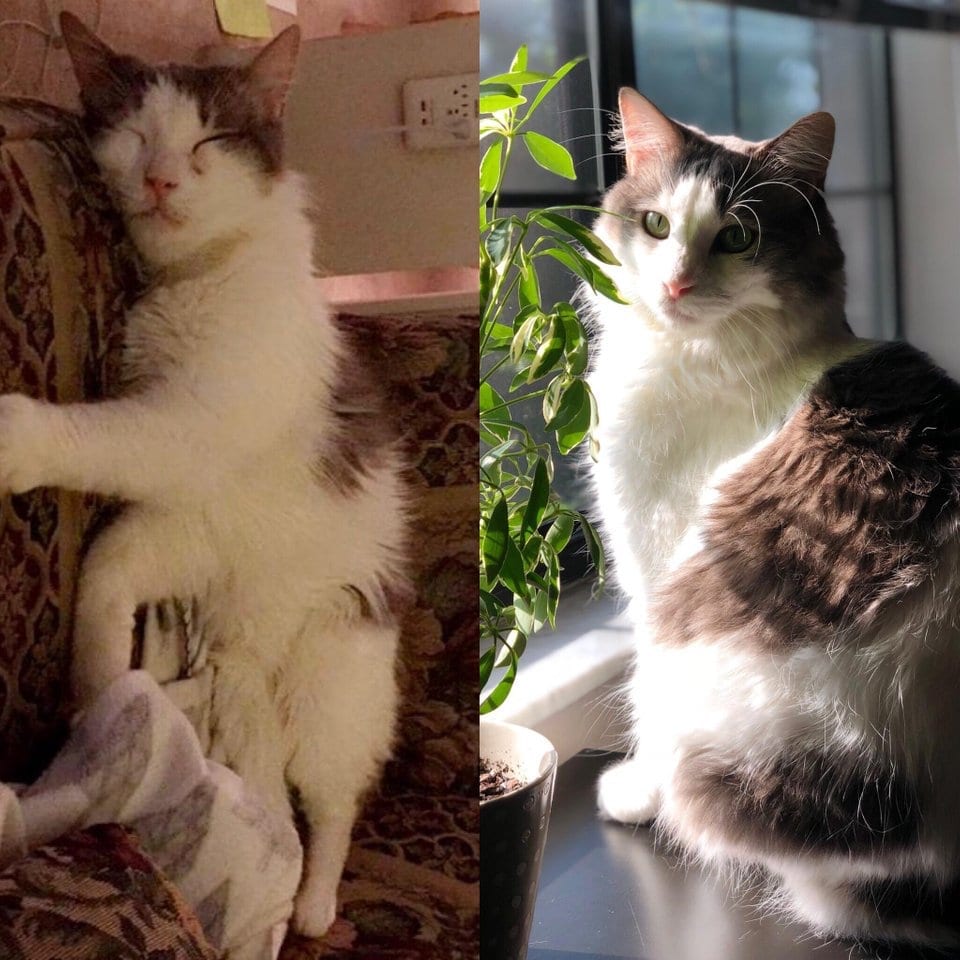 #3 This is Isabelle! She’s 13, we adopted her yesterday and she loves to cat loaf on me when I lay down.

#4 Elmer was adopted one year ago this week. He was kept in a “special” part of the shelter, because he wouldn’t let any visitors pet him or play with him. He was also obese, and for these reasons nobody wanted him. He’s now my best absolute best friend and ESA.

#5 Still recovering from surgery so the adoption isn’t official yet but we got to take her home. No solid evidence of her breed were thinking maybe mal or Dane and lab?

#6 People passed on him because of his age, skin conditions (allergies), and silly walk. They missed out on one sweet cuddle bug.

#7 5 month progress update on Mjolnir: Dog Of Thunder. I proudly call her “fatty” (Ignore the coupon clip, it was from her final bout of heartworm treatment)

#8 3 years ago a family dropped this beautiful girl off at a local shelter on Valentine’s Day..we were lucky enough to adopt her after 3 weeks of calling the shelter everyday to check when she was ready to be adopted..she loves her brother and sister!

#9 Here’s Bowie! Up top – very scared in the noisy pound in Cyprus after being rescued – he’d been left in a sack on the side of the road. Bottom – making himself right at home in London!

#10 Rory was a teeny malnourished kitten abandoned in a bin with his mum, but almost 2 years later hes very happy and well fed!

#11 Patches, our most fearful sad-faced cat at the shelter vs. 2 months later at his forever home

#12 This good boy and his sister were left on the riverbank. She got adopted from the shelter before him so he was having a tough time being alone, but he’s come around since. 2 weeks in, he’s completely relaxed and has found home. We’re also planning on a family reunion some time in the future.

#13 One year ago today we found this precious pupper under our car. Poor thing was covered in fleas and ticks, and we fought mange for 2 months. She is happy and healthy now with so much love!! Happy Valentine’s Day and Found Day!

#14 We adopted this scared stray cat 3 years ago. She is doing great!

#15 At the shelter and over year later!

#16 This stray cat we adopted 3 years ago and now.

#17 Meet Bella. When I rescued her in September, she was so skinny/fragile and smelled of urine. Now she’s very healthy, confident, and full of fun! She also has developed some unique face markings.

#18 When we got Pippa 5 months ago her fur was matted and tangled, bottom pics are her now celebrating her first birthday!

#19 UPDATE: 6 month transformation. Reddit, I promised you an update.

#20 9 months ago, I brought home this scared girl from a rescue. She’s still skittish with new people but her smile shows how far she’s come.

#21 Adopted her up from the shelter a few days after Christmas, she hid the first few days, only occasionally coming out for food. She still didn’t like to be picked up and avoided me. Little by little she started moving around. Today she let me pet her. One of the most curious of cats – Meet Pepper 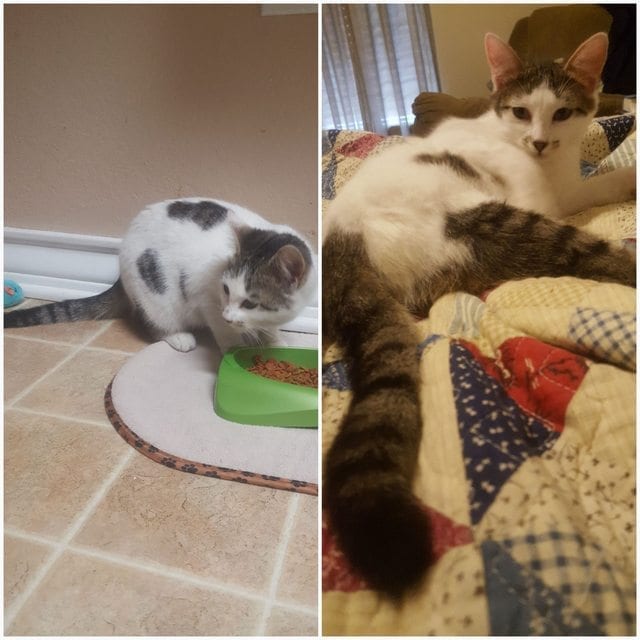 #22 Senior toy poodle we adopted from the pound – she was found wandering with no collar, supposedly blind, and completely deaf. Turns out she’s only 80% blind but desperately needed a haircut. (the before pic is in our house, the pound took down the listing) She’s happily retired in our house now 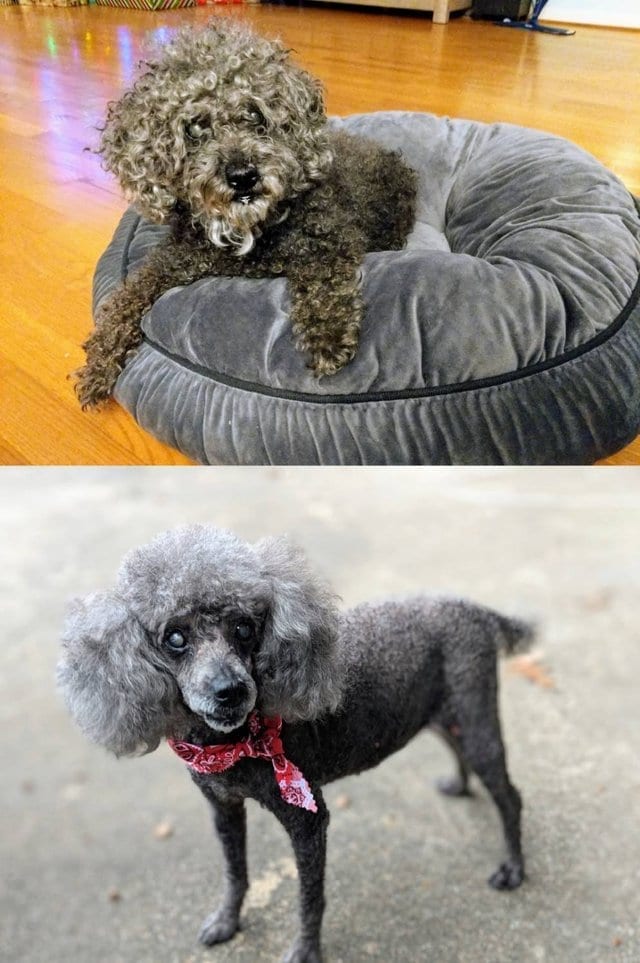 #24 I get to save kittens for a living. It’s pretty great.

#25 Kai-Otay on her adoption day three months ago and today. We had to treat her for roundworms and hookworms and she’s now 5lbs heavier and happier. Best dog ever. 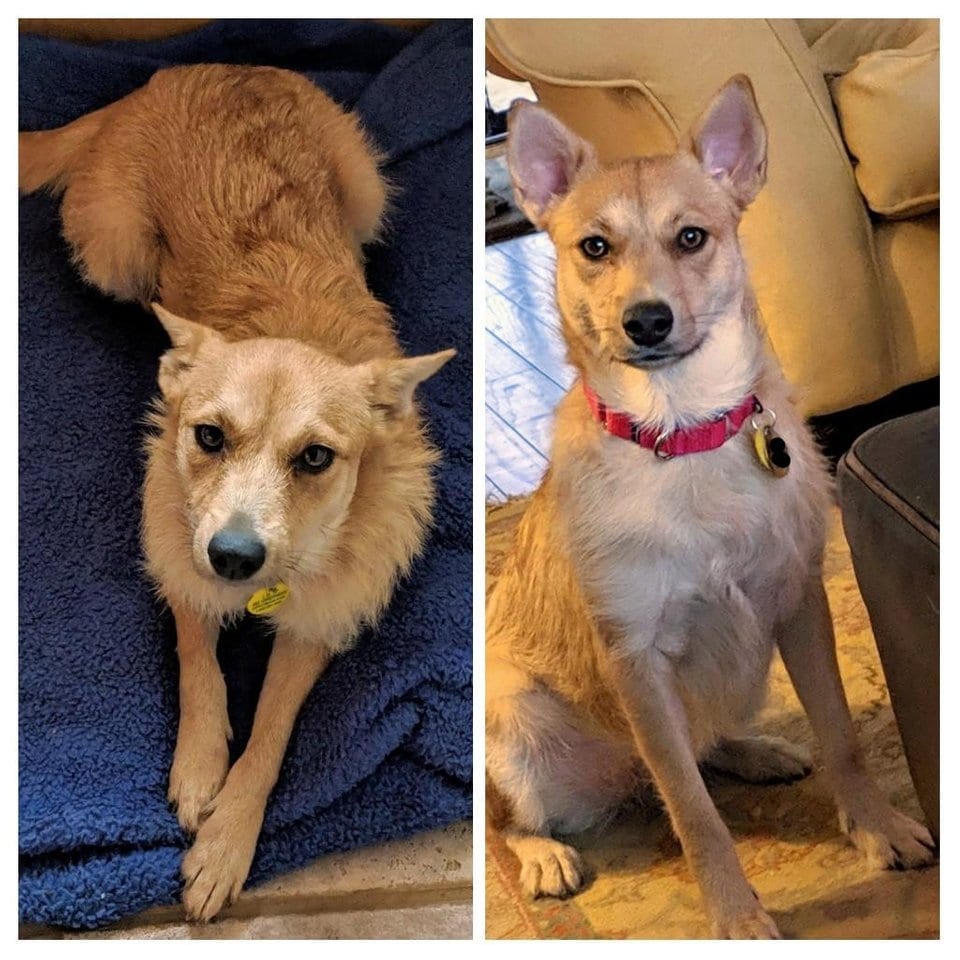 #26 Our beautiful Saint Bernard/ Great Pyrenees Scully, before & after we reduced her. 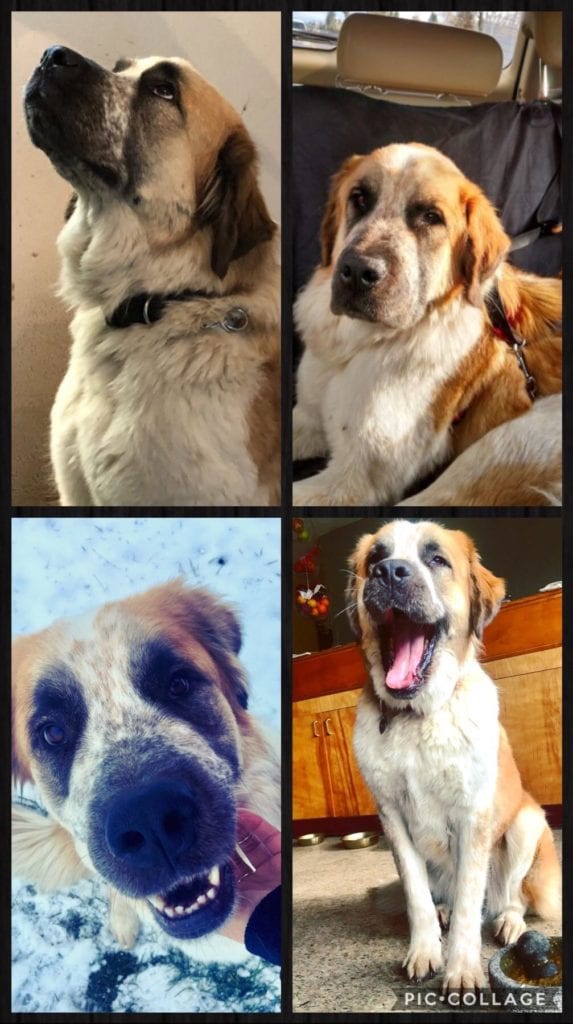 #27 Rory’s mum Rosie, before and after adoption as requested 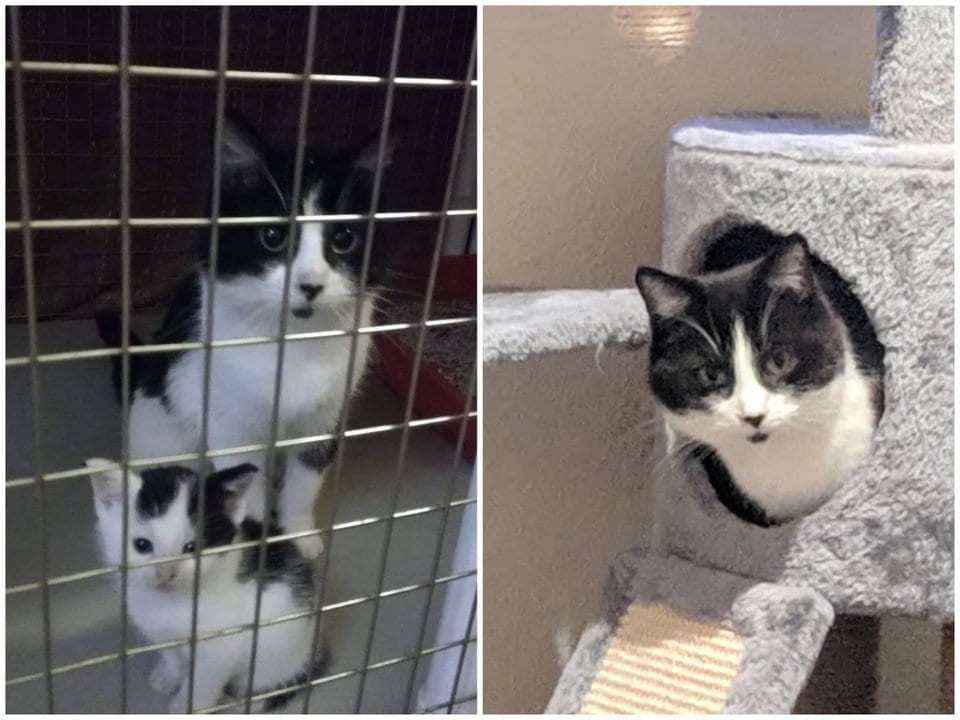 #28 She was found in our backyard crying and cold. We bottle fed her and gave her so much love. Now she’s happily living with my sister living her best feline life! 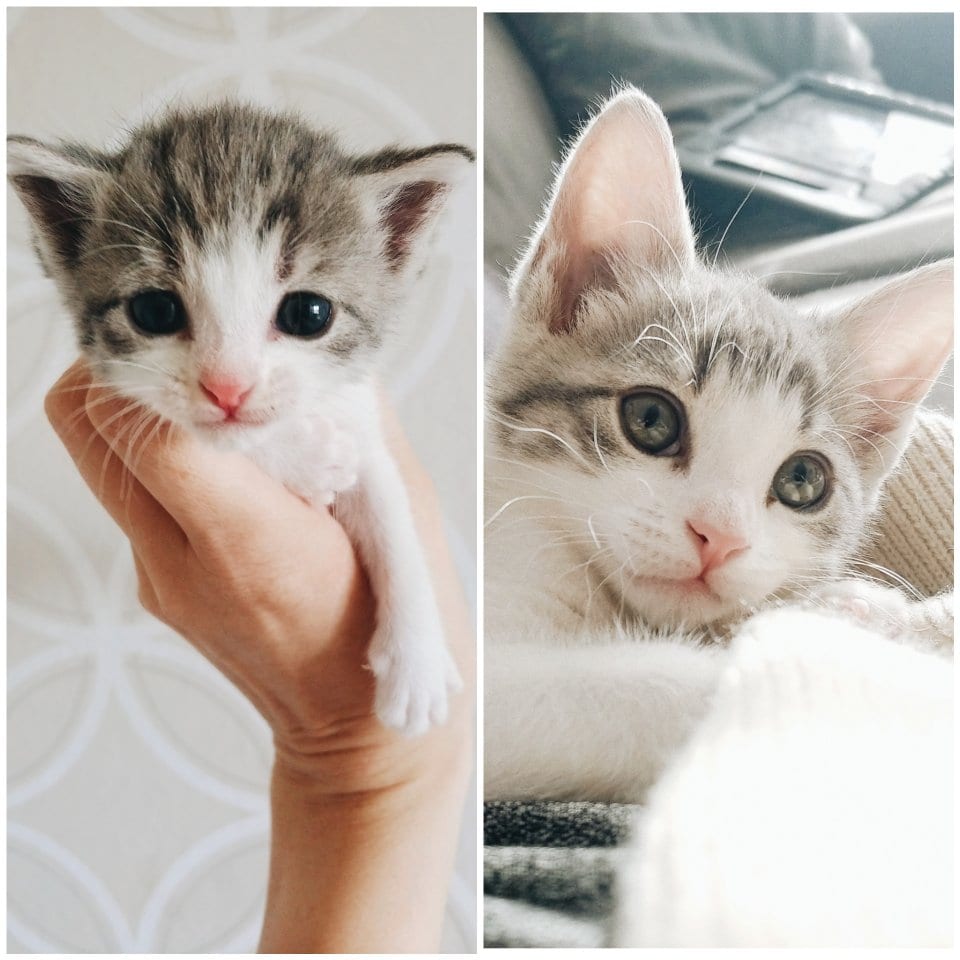 #39 Music video promoting pet adaption in Japan, about adopted cat and dog remembering their days on the streets

#30 Happy Gotcha Day! What a difference a year of love makes. We rescued Vinny from our local humane society on Valentines Day