According to the recent stats about 500,000,000 animals have been killed in Australia’s wildfires so far. On the one hand everyone is worried about the possible WW3 Australia are striving to survive through these bushfires nowadays.

Half a billion animals have been killed so far in these Australia’s wildfires, there are fears that some animals’ entire species might have been wiped out.

However, University of Sydney’s ecologists have estimated the number of lost mammals, birds and reptiles 480 million since September 2019 and the number is keep soaring up sadly. 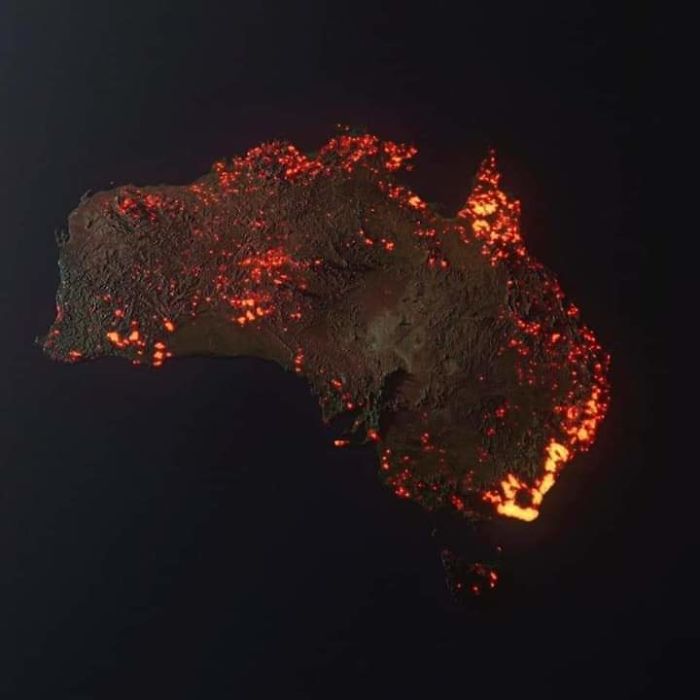 Let alone the rest of Australia, just last few days Victoria and New South Wales have been ripped to pieces with many people displaced, missing and dead.

# Since the fire has passed through Mallacoota this amazing, selfless young guy has been out searching for injured wildlife. This is one of 7 koalas he’s saved so far.

#Kangaroos and Koalas have been heavily wiped out

# To Our Nation’s True Heroes – The Thousands Of Firefighters Currently Battling Fires Across Our Country, We Thank You From The Bottom Of Our Hearts

# Neighbours Helping Out Strangers During The Australian Bushfires. Everything Helps And It All Adds Up!

# A hug this time feels a lot

# Quite Literally Watching Your World Burn

# I’m So Proud Of My Country, Our Volunteer Firefighters Are Legends In Their Own Category

# This Fire Fighter (And All Ff’s) Saving The People, Animals, And Homes In Australia

# After Spotting A Koala Crossing A Road Amongst The Flames A Woman Rushed To The Animal’s Aid, Wrapping It In Her Shirt And Pouring Water Over It

# My Family Have Been Fighting These Fires On Our Farm And Our Community Nonstop For Over A Month. This is a picture of my Dad getting 5 mins sleep on our front lawn, while my brother keeps watch over the fire burning at the top of our farm after he finished his 10th 12 hr+ day in a row fighting voluntarily in the community with the RFS NSW.

# The Government cut major portion of funds, so the people of Australia raised the sum up to themselves and managed to volunteer

# Amazingly Surreal Photo Of The Bush Fire In Australia

# 3D “Visualisation” Of The Fires In Australia, Made From Nasa Satellite Data